Why are habits so important to things like wealth, health, fitness, wellness, relationships, and happiness?

Your food choices, health actions, spending and saving patterns, level of physical activity, how you communicate with others, what and how you eat, how successful you are with achieving your goals and New Year's Resolutions, and so much more are controlled by your habits.

The four pillars of life are: Relationships, health, professional, and spiritual.  Your success is mostly dependent on your habits in any and all of these areas. That's how important habits are!

It's not about your willpower or how lucky you are, it's about your habits!

Where you are now in life is a direct reflection of your habits. Fit, healthy people think a certain way and act a certain way. Rich people do too. The same goes for people who have close, long-lasting relationships with others, and for those who are spiritually fulfilled.

How would you like to reach your ideal weight, have deep, fulfilling relationships, strengthen your soul, earn more money, and save enough to retire?

This course will help you to literally rewire your brain to think and act like the person you want to be by showing you how to replace old, unhealthy habits, with new, healthy habits, in less time, and with less effort and willpower than you ever thought possible!

There isn't one specific formula that works on everyone for breaking old habits and creating new habits, but scientists have found an effective framework which is what this course is designed around.

Does that make sense? Are you ready to dive in? Here we go!

When we consciously repeat any particular routine, we are forming a habit. If we have to think about it to do it though, it's not a habit yet. Habits form when we have consciously performed a routine or ritual enough times, that it becomes deeply rooted in our subconscious - the automatic part of the brain.

The reason the brain does it this way is because the subconscious areas of the brain require much less energy to operate than the conscious areas of the brain. The most prominent conscious area of the brain is the prefrontal cortex (PFC), which lies just behind the forehead. Since the brain and the body are all about efficiency and conserving energy whenever possible, routines get assigned to the subconscious brain (SB) in order to be taken out of the conscious brain (CB) as soon as possible. This could be as fast as 5-6 repeats of the same simple routine (like stamping an envelope), or as long as hundreds of repeats for a complex routine (like driving a car).

Once the SB gets a hold of the new routine, the CB doesn't have to expend all that energy anymore on that particular routine. It's an automatic routine now, called a habit, and that saves lots of energy. It also becomes more powerful when it's relegated to the SB because the SB has more influence over your actions than the CB does.

When you learned to drive a car, you had to think about every step of the process, in the right sequence, for the whole trip. Then, once you became an experienced driver, you could get to your destination sometimes without even remembering big parts of the trip. This is because the SB was driving for you in those parts, freeing up your CB - the high energy part of the brain - to think about other things.

Exercise is the best keystone habit.

Imagine what it would be like if you were at your peak fitness, and optimal health? What effect do you think that would have on the other pillars of life?

This is why exercise is called a "keystone habit" because it supports other habits and choices, spilling over into the other pillars of life.

For this reason, most of the examples I use in this course relate to health and fitness, but what you will learn can be applied to any part of your life that you want to change, so use these skills often and consistently to achieve any of your goals and resolutions.

Don't worry though, you won't have to exercise every day or even hours a week as most fitness freaks do. In fact, you will pick your exercise and most of the time it will be less than 10 minutes per session. Most omportantly, it will be fun, and when you are finished with this course, it will be something you actually look forward to and even crave!

This course is a result of my time spent researching brain science, starting when my mom was diagnosed with Alzheimer's disease in the year 2000. I dove into brain research (which was easy because I was already an avid researcher in the fields of exercise and nutrition science) to try to find a way to help her. Since she was already in such an advanced stage, and the science was so young, there wasn't enough information to help her much, so she passed in 2005.

The science was changing fast though and I was learning new things every day, so I never stopped studying the research because I knew I would be able to help people more someday and that has happened. In fact, we now know that Alzheimer's is REVERSIBLE, giving hope to millions afflicted with this cruel disease. In fact, I wrote a post on that subject, which you can click here to read if you like, but let's get back to the task at hand - your habit changes!

With all this research in brain science, I have also learned how the brain forms these automatic routines called habits.

If we become aware of them, then we can understand how they work. Then we can learn how to take control of them. Then we can form new habits and reprogram or erase old habits.

Once we learn how to harness these new habits and use them to our advantage, life changes drastically and goals, dreams, and resolutions become reality.

I learned most of what I explain in this course through many different sources. Some of the main resources are listed at the bottom of this page for reference if you are interested in further reading. I would certainly suggest you do that, but you don't have to because I've done it for you by putting it all together here in this course.

This course is designed to help you move forward at your own pace, so be sure to go as slowly as you need, to absorb the information completely and master each step before clicking through to the next step. If you go too fast, your brain will be doing too many steps at the same time, will quickly become overwhelmed, and will make you want to quit.

If you feel the need to quit at any point in this course, it's because you are either going too fast, or your brain is resisting change, so in either case, just stop to work on the present habit or even back up to work on a previous habit that might be a good catalyst for continued progress forward.

Everyone moves at a different pace, but those who move too fast ALWAYS fail. It should feel like it's TOO SLOW of a pace.

Your goal and resolution failures in the past were likely due to moving too fast and biting off more than you could chew. It took you months or years to form the habits you have now, so don't expect your new habits to be formed overnight. They will happen MUCH faster than your old habits, thank to the steps in this course, but take your time and do this right. You're worth it!

If you are a perfectionist, get over that. You will not succeed in this course (and in many other things in life) if you don't cut yourself some slack and learn how to forgive yourself for less than 100% success. Perfectionists also have trouble getting started if they don't think success is guaranteed, so get over that too and just start already! If you don't try, you won't even get to find out if you will succeed.

The world-famous hockey player Wayne Gretzky said, "You miss 100% of the shots you don't take." The best baseball players strike out 2/3 of the time. Struggles, setbacks, and failures are part of being human. One of the things you will learn in this course will be how to get back on track when (not if) you get off track, but it certainly is designed to be an easier and faster system than any most of you have ever experienced before.

As you go through this course, you will essentially be "hacking" your brain and figuring out how to rewrite, recode and rewire your circuits for successful and permanent health and fitness results. Once you do this, you will know where to go next because you will learn what's most effective for your individual brain, so I invite you to be your own scientist and experiment with curious anticipation. Be sure to NOTICE what works, APPRECIATE the process and BELIEVE that you are the boss of your brain and your habits!

Congratulations! You just finished step one: Understanding the Concept of Habits.

Now, if you feel like you have grasped this step completely and have the time to move on right now (about 30 minutes of undivided attention), click the button below for step two. 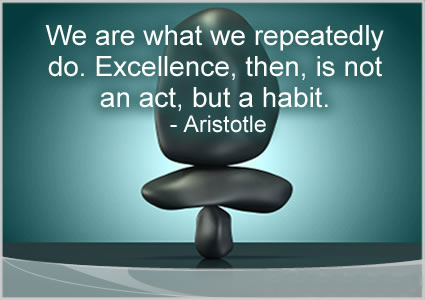 Note: This course is designed for all brain types and learning styles, so each lesson will have an audio file to play (for auditory learners), and of course, the written version (for visual learners) and sometimes a short video on the key points, when necessary.